In 1929, William Garner Sutherland, D.O. presented the idea of Osteopathy in the Cranial Field (OCF) also referred to as cranial osteopathy. ‘Craniosacral therapy’ is not the same as OCF and that will be discussed in other articles. OCF has been controversial since its origins for many reasons. OCF was not presented as a separate treatment modality but simply as an extension of the principles of osteopathy as described and taught by Andrew Taylor Still, MD, DO, the founder of osteopathic medicine. The new concept that Dr. Sutherland described was called the ‘Primary Respiratory Mechanism’ (PRM) with five components that make it up. The cranial concept is a misnomer because although it was originally described in the head, the PRM is present throughout the whole body. The PRM is a rhythmic motion described as an ebb and flow throughout the body that practitioners feel can have a profound influence in health, especially when it changes in amplitude and frequency. Cranial osteopathy can be very helpful for treating tension and migraine headaches, vertigo, pain in the neck, back and beyond. Let’s briefly look at the five components.

The Motility of the Central Nervous System (CNS)

The brain and spinal cord have an inherent motion to them that is separate to any breathing respiration and the pulse of the cardiovascular system. The motion is described as a coiling and uncoiling of the brain. As this happens the, spinal cord moves up slightly during the coiling and then downward during the uncoiling phase. The coiling phase is called the ‘inhalation’ or ‘flexion’ phase of the respiratory mechanism; the uncoiling is called the ‘exhalation’ or ‘extension’ phase. In a 1987 study by Feinberg and Mark titled ‘Human brain motion and cerebrospinal fluid circulation demonstrated with MR velocity imaging,’ they postulated that the movement of the central nervous system may be driven by choroid plexus, the cells that produce the cerebro-spinal fluid (CSF).

The ‘research’ section of the Cranial Academy website describes the research for each of the five components of the PRM.

Fluctuation of the Cerebro-Spinal Fluid (CSF)

Cerebro-spinal fluid (CSF) flows through the ventricles in the brain around the brain and the spinal cord. The CSF is produced by choroid plexus tissue in the brain. Dr. Sutherland described the flow of the CSF to have an ebb and flow rhythmic fluctuation corresponding to the inhalation and exhalation phase of the PRM. Osteopathic physicians have described CSF flow to exit the central nervous system through the subarachnoid space and bathe every cell in the peripheral tissues. Bechter has described the peripheral pathways of the CSF to the interstitial space and finally into the lymphatic system. The research demonstrating the possibility of the concept that the CSF can exit the central nervous system has been inconsistent. The idea that trained osteopathic physicians can palpate this rhythmic fluctuation is controversial.

The dural membranes are a part of membranous envelopes called the meninges that encase the brain and CNS. The dura mater attaches to certain cranial bones intracranially and can have external portions through the sutures of the skull. In addition the dura attaches to upper cervical bones and the sacrum.The dura mater envelopes the brain and spinal cord. In the head the falx cerebri and tentorium cerebelli are a part of the dural system with shifting tensions. The falx cerebri and tentorium cerebelli are called ‘reciprocal tension membranes’ because when one is taut, the other is slack. Osteopathic physicians practicing OCF feel that by shifting tensions, the dura mater will play a role in moving the bones that they are attached to. The bones move in rhythm with the motion of the shifting tensions in the reciprocal tension membranes. It is by this mechanism that the bones of the head are theorized to move as the head goes through its inhalation and exhalation phases. As the CNS coils (inhalation) and the spinal cord moves upward, so does the dural membranes. As the CNS uncoils (exhalation) and the spinal cord drops, then the dural membranes follow as well.

The dural membranes are described as exiting the head through the foramen magnum attaching directly on C2 and C3 in the upper neck and attaching to the sacrum and then to the coccyx via a thin strand of fibrous tissue called the filum terminale. This concept is controversial as some anatomists believe that the dura is connected to structures all the way down until it attaches onto the sacrum. Therefore they do not agree that the dural tension can restrict the ability of the spine and sacrum to move. Many osteopathic practitioners feel that the dura is highly important not just in the movement of the head but also to those structures in the upper neck and sacrum. The dura mater is innervated by 4 cranial nerves. These are the Trigeminal nerve, the Vagus nerve, the Facial nerve, and the Hypoglossal nerve. As a result the dura may be highly influenced and affected by these cranial nerves.

Releasing tension in dura is very important to cranial practitioners because of its ability to influence so many structures. For example, dura influences some of the suboccipital muscles directly such as rectus capitis posterior minor muscle via an arthrodural bridge. Also there is a direct attachment between the dura and the ligamentum nuchae in the neck, where many neck muscles such as trapezius and splenius capitis have attachments. Through mechanisms such as these, the dura can then influence many seemingly unrelated structures throughout the body even into the extremities. Lastly, as a band-like tissue, the dura is believed to play a role in the fluctuation of the CSF as described above. Many of the concepts described above are the reasoning as to why osteopathic physicians will justify treating structures that are believed to influence or be influenced by dural membranes.

The Mobility of the Cranial Bones

From my searches, I have been able to find more up-to-date research showing that the bones of the head can move than there is research showing that the bones of the head do not move. Also opponents of OCF, often quote research from Norton and Hartman, biased researchers who are openly opposed to cranial osteopathy and whose research is aimed at disproving the cranial concept. This, in itself, is a conflict of interest prior to conducting a study. Their research has concluded that the inter-examiner reliability is poor for practitioners trying to feel cranial motion. If this is the case, manual knee examinations have poor inter-examiner reliability and yet no one is concluding that orthopedic doctors need to stop doing knee examinations. NASA researchers and others, on the other hand, have done studies concluding that the skull moves at least small amounts (micrometers) in order to adapt to changes in intracranial pressure. More research is needed on the subject but that does not mean that OCF is a ‘pseudoscience.’ Please see the ‘cranial bone mobility’ section of the Cranial Academy website for a synopsis of the research. 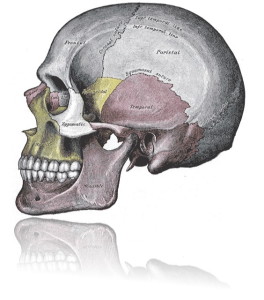 In order to be able to appreciate how the cranial bones can move, one must first study the sutures and articulations of the skull in much detail. Doing this, one can find beveling changes, fulcrum points and other small nuances which allows for small motion. The movement of the bones into inhalation and exhalation matches the shifting tension from the reciprocal tension membranes. Much of the controversy behind this concept is that people claim that the hands are not sensitive enough to palpate the motion taking place, especially if it is only micrometers. I am well aware of the controversy with this concept. The motion is subtle. I approach things differently than most in that I do not simply try to palpate the cranial rhythm. In my practice, I articulate the bones either directly or indirectly to gain an appreciation as to whether it can move or not compared to its counterpart or to the other side of a midline bone. In addition to manually moving the bones to test their motion, I also move them in a therapeutic fashion as part of my treatment. Areas where there is limited motion or the sutures feel compressed are often associated with tenderness. Restoring normal motion to the bone or decompressing the sutures results in the area will result in a decrease or disappearance of the tenderness.

In terms of survival, it would make sense for the bones of the head to move. Having mobility between the bones of the skull makes the overall skull more pliable. This would allow the skull to dissipate the forces of and withstand an external trauma more efficiently. This pliability would also allow the skull to adapt to changes in intracranial pressure better. Patients with the most severely limited cranial bone motion have heads that feel closest to what a hard, fused skull would. These patients are also much more sensitive to smaller traumas and cannot tolerate situations as well where there are changes in pressure such as flying or upper respiratory infections. These patients describe feeling the forces of a trauma reverberating throughout their bones well beyond their head.

The Involuntary Motion of the Sacrum Between the Ilia

This concept of the OCF links an involuntary motion of the sacrum between the ilia. The sacrum moves in synchrony with the cranium between the sacroiliac joints. As I have described in the previous sections, the spinal cord and dural membranes are pulled upward during the inhalation phase of the PRM and then drop during the exhalation phase. The dural membranes have strong attachments to the sacrum at the level of S2. Therefore, through this mechanism it is believed that the sacrum will be pulled up and the base will rotate forward during inhalation and then will lower slightly and the base will rotate backward during exhalation. It is the dural attachments that link the head to the sacrum and allows them to move in a coordinated rhythm.